Niger: strengthening communities along transit routes
Expertise for Viet Nam, care staff for Germany
Our work around the worldDisplacement and migrationCreating opportunities for returnees in Tunisia: a new start in their country of origin

CREATING OPPORTUNITIES FOR RETURNEES IN TUNISIA: A NEW START IN THEIR COUNTRY OF ORIGIN

SEVEN YEARS AFTER THE ARAB SPRING, THE SITUATION ON THE TUNISIAN LABOUR MARKET IS STILL UNSTABLE. THIS LEADS MANY PEOPLE TO TRY THEIR LUCK IN EUROPE – SOMETIMES EXPOSING THEMSELVES TO GREAT DANGER. ALL THE WHILE THERE IS HIGH DEMAND FOR WORKERS IN VARIOUS SECTORS, BUT THE APPLICANTS OFTEN LACK THE QUALIFICATIONS THEY NEED. IT IS VITAL TO HAVE THE RIGHT INFORMATION, BOTH ABOUT THE JOBS AND THE REQUIREMENTS FOR GETTING THEM. THIS IS WHERE THE MIGRATION FOR DEVELOPMENT PROGRAMME COMES IN. 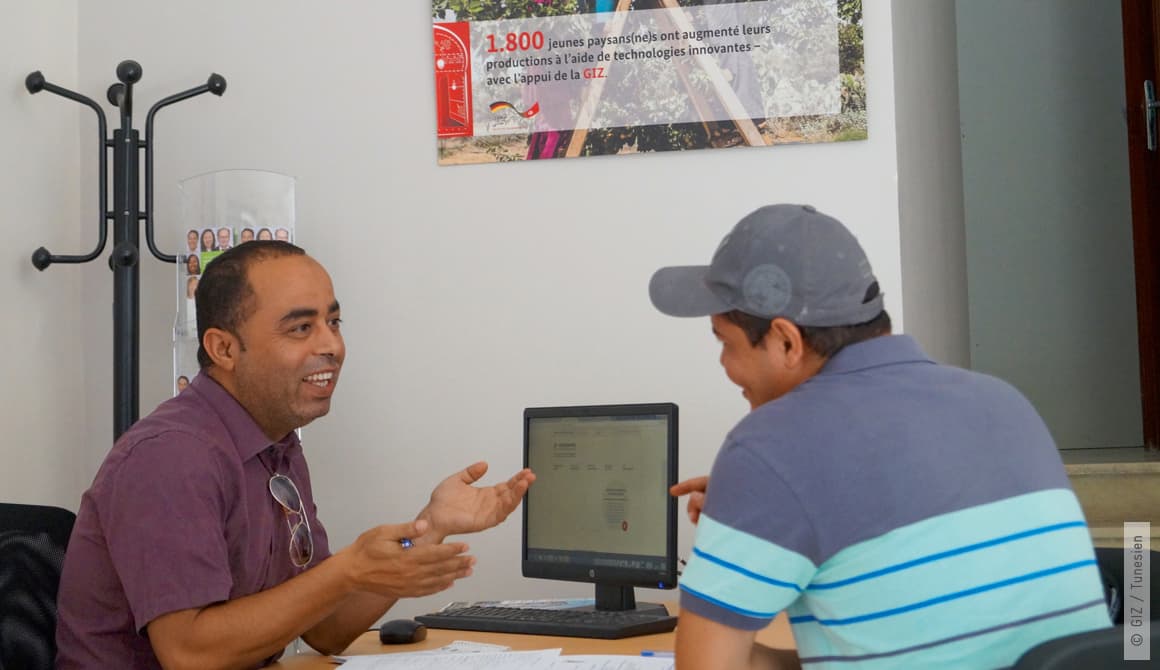 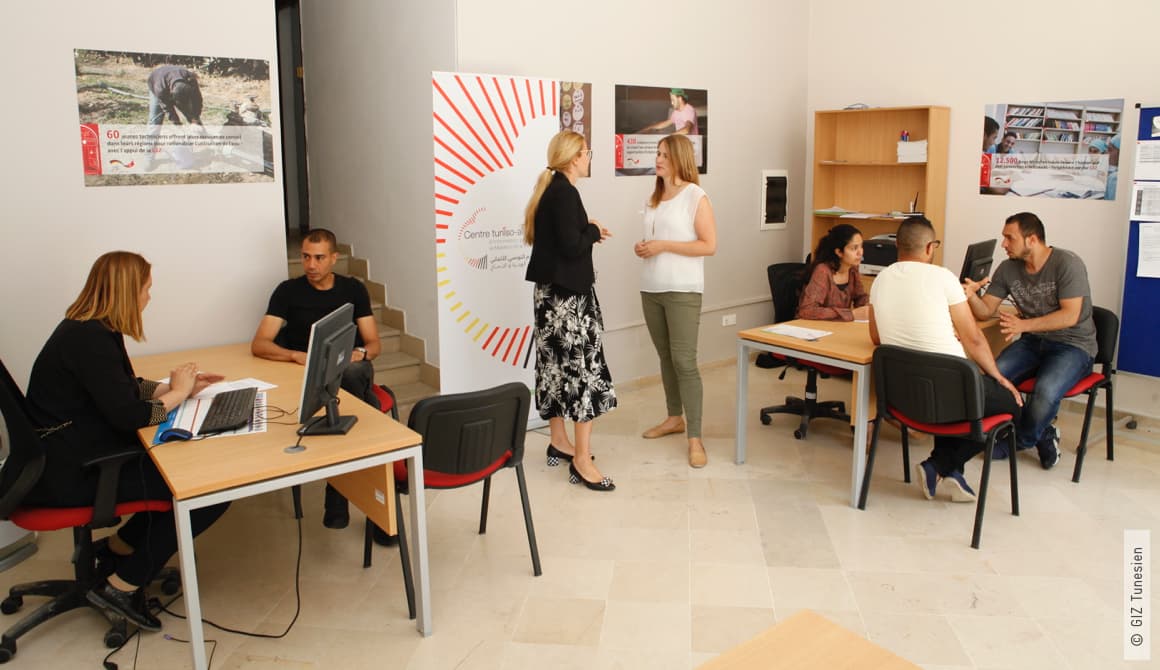 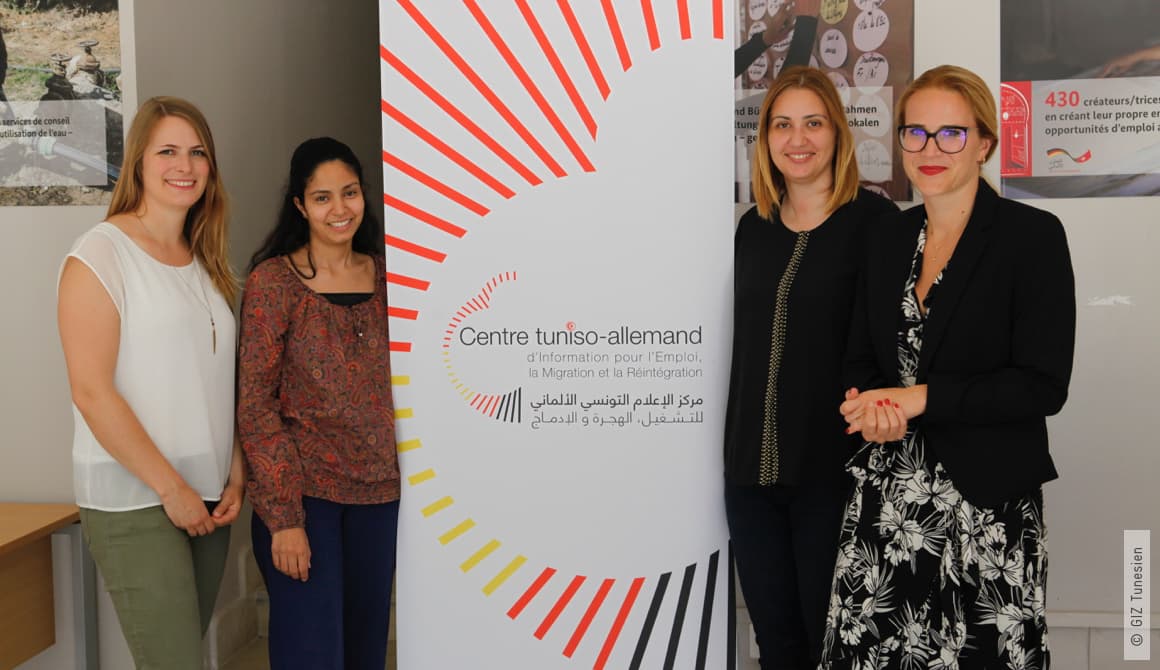 It’s early morning in Tunis, and Fatma Khalaf, an advisor at the German-Tunisian Centre for Jobs, Migration and Reintegration, has already given two consultations. The centre was established jointly by the Tunisian National Employment Agency and GIZ, working on behalf of BMZ. Every day visitors drop in to ask for advice on how they can improve their lives. In addition to the one in Tunisia, there are also advice centres in Albania, Ghana, Kosovo, Morocco, Senegal and Serbia. Others are in the process of being set up, likewise on behalf of BMZ.

The approach is similar everywhere: the staff provide advice on opportunities for employment or training in the country of origin, but also on the requirements that people need to meet if they want to migrate to Germany for work. The services on offer include application training and regional job fairs as well. The centres also have a significant role to play for people returning to their country of origin from Germany, who receive support to help them settle back in.

The advisory process begins in Germany, often in one of the returnee advice centres situated throughout the country, which are run by the state or charitable and social organisations. The staff there, in turn, are supported by 15 reintegration scouts from GIZ deployed in selected centres. As advisors to the returnee centre advisors, they serve as a link between Germany and the countries of origin: they put people in touch with points of contact in the relevant countries and provide information on individual job opportunities and specific offers.

Just how well the returnee advice centre in Germany, the reintegration scouts and the local migration centre work with each other is illustrated by the example of the young Tunisian Seifeddine Bettaieb. Planning his return to his home country, he was hoping to set up an organic farm for fruit and vegetables, and looked for advice on this in Braunschweig. Farida Mellaoui was called in as a scout, and asked for help from the German-Tunisian Centre for Jobs, Migration and Reintegration in Tunis. The answer from there was immediate: the young man could be a promising candidate for a GIZ project that had just been launched to promote business start-ups in agriculture.