An Overview: Our Enviromental and Climate Management
Our goal – to reduce per capita emissions
Corporate SustainabilityEcological balanceGIZ Energy use in Germany is very different from consumption abroad

GIZ Energy use in Germany is very different from consumption abroad 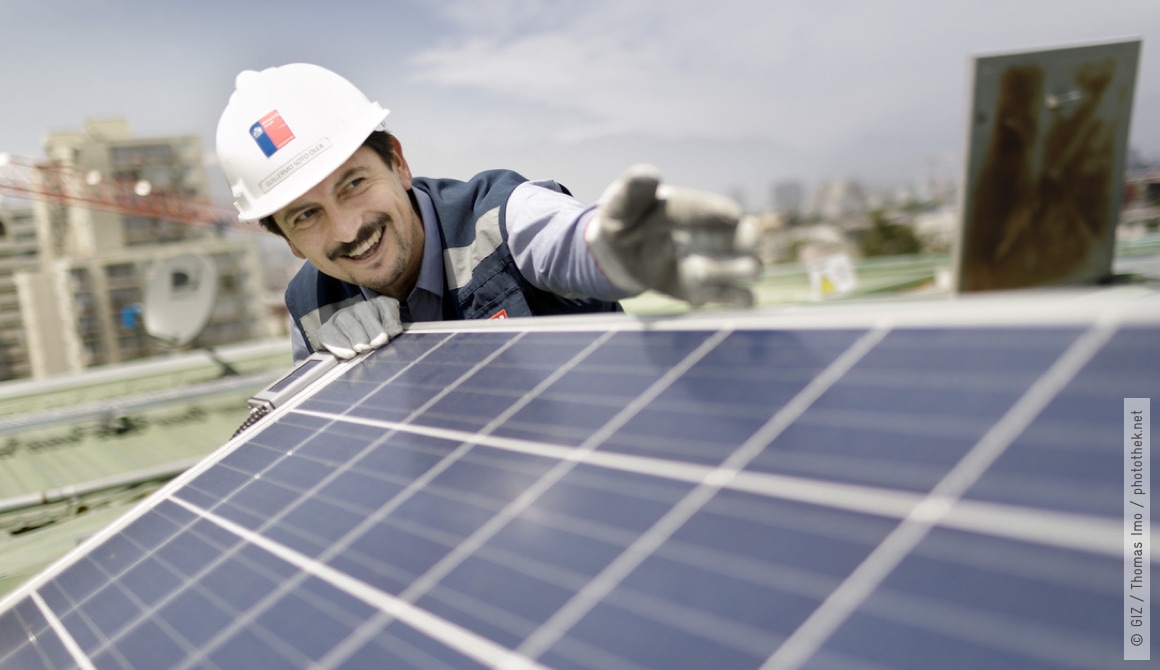 GIZ strives to save energy systematically. We use the environmental management system EMAS and the management tool CSH to monitor and analyse our energy consumption in Germany and abroad.

ENERGY CONSUMPTION IN GERMANY AND ABROAD

In Germany, our energy consumption comprises electricity and heating / cooling energy combined. Outside Germany, consumption of fuel for company vehicles and generators is also included.

Almost all the power used at GIZ locations in Germany is green electricity. In 2018, electricity from renewable energy accounted for approx. 85 per cent of the total. The consumption of conventional electricity stems from the use of common spaces, such as reception areas and lifts. In a number of instances, GIZ has rented only part of the building and thus has only limited influence on the choice of electricity product. Wherever possible and economically viable, we are gradually introducing LED lighting and also trying to use ventilation systems to make savings.

Since electricity generated from renewable energy is not yet sufficiently developed in most countries, we cannot achieve similarly high renewable energy figures outside Germany. In Liberia and Sierra Leone, we are installing photovoltaic systems for power generation; in others countries, such as Bolivia, we have charging stations for electric company bicycles.

Heating/ cooling energy and electricity account for almost all energy consumption at GIZ locations in Germany, with heating / cooling energy being responsible for slightly over half. The proportion of renewable energy is around 11 per cent and is derived from geothermal systems as well as small-scale photovoltaic systems.

The biggest differences are in the direct consumption of energy from car fuels. Energy consumption from fuels in company cars and generators at GIZ locations in Germany plays a subordinate role compared with GIZ locations in other countries. The figure for 2018 was 166,825 kWh in Germany and 40,922,599 kWh at other locations. While the GIZ fleet in Germany consisted of only 13 cars at the end of 2018, the company ran around 4,000 vehicles in other countries.

* Note: In 2019, we rolled out a new calculation tool to document and audit German data from 2018 onwards. Moreover, we revisited data from 2016 and 2017 to ensure that the various different years are clearly comparable and that trends are not misinterpreted.
** In Germany, total energy consumption is made up of electricity and heating / cooling energy combined. Outside Germany, consumption of fuel for company vehicles and generators is also counted.

Disclaimer: The data for 2016 and 2017 were recalculated in 2019 and are therefore shown here again.

More on this topic

A basic principle that GIZ respects in all its activities is the need to deal responsibly with the environment and natural resources. Read here how environmental and climate management works at GIZ.

We apply the ambitious environmental management system EMAS at six German locations. You can read more about this in the 2019 EMAS Environmental Statement (German only).